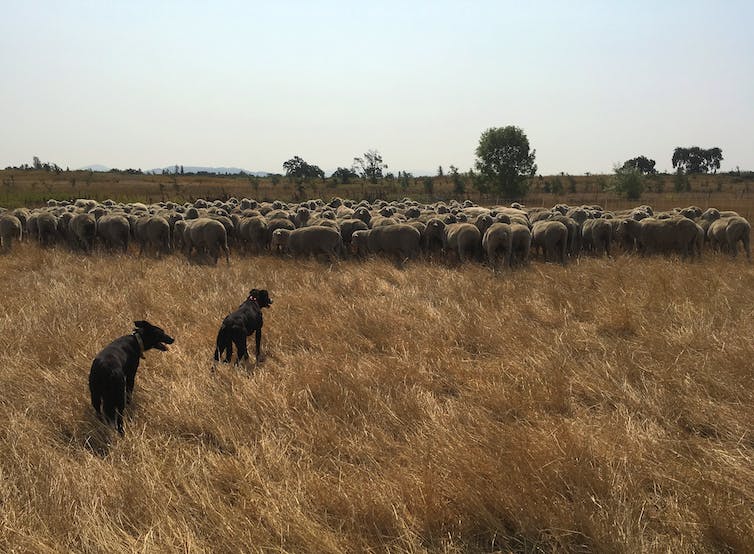 As California contends with drought, wildfires and other impacts of climate change, a small yet passionate group of residents are attempting to lessen these effects and reduce the state’s carbon emissions. They are ranchers – but not the kind that most people picture when they hear that term.

These first-generation ranchers are young, often female and ethnically diverse. Rather than raising beef cattle destined for feedlots, many are managing small grazing animals like sheep and goats. And they are experimenting with grazing practices that can reduce fire risk on hard-to-reach landscapes, restore biodiversity and make it possible to make a living from the land in one of the most expensive states in the country.

Our research focuses on food systems, rangelands and livestock production. In our recent work, we found new ranchers in California using innovative strategies that they believe can mitigate fire risk to communities and improve soil through grazing.

We see an opportunity for the public and government agricultural agencies to support these producers, who are reframing livestock production systems in ways that could benefit the environment.

Ariel Greenwood describes what it’s like to be a young female rancher.

A hard industry to enter

Ranching is a family operation in California, with the vast majority raising beef cattle. The primary ranchers on traditional operations are mostly male, mostly white and generally in their late 50s to early 60s. They typically work together with their children, which lets younger generations draw on decades of knowledge and experience, as well as long-term connections to the land and to rural communities.

Because land in California is expensive, there are few independent first-generation beef cattle ranchers. Several first-generation ranchers whom we interviewed relayed stories of friends leaving the state to find places with cheaper land and fewer regulations. One explained that expanding urban edges and more profitable land uses are rapidly transforming rural landscapes and making it difficult, if not impossible, to “make a go of it” as a new rancher.

Climate change is challenging farmers and ranchers across the U.S. in many ways. On western rangelands, climate variability has increased the magnitude and number of extreme wildfires that occur each year. Wet years cause vegetation to thrive, while subsequent severe droughts turn it into deadly fuel.

Our research team wanted to understand how first-generation ranchers were adapting to California’s changing climate. Our preliminary research indicated they were less prepared for future droughts than more established ranchers, and they were less likely to use drought adaptation strategies, such as raising fewer animals than their land can support in good years. This approach hedges against the risk of bringing animals to market during dry years, when prices are less favorable.

But we soon discovered a new generation of ranchers who are creating different and often entirely new types of production systems in response to California’s climate extremes and high costs. Because they are starting from scratch, many of them do not view their practices as adapting, we learned. Rather, they see these techniques as central elements of a new kind of ranching.

For example, we interviewed one young first-generation cattle rancher who is experimenting with “mob grazing” – putting animals on small areas of land in dense groups for periods as short as a few hours, then moving them to new plots. Moving his herd as a close-knit unit across pastures mimics the natural movements of historical elk herds that use to roam coastal California.

His goals are to increase soil carbon storage and native vegetation by using hoof trampling to break up and incorporate residual plant matter into the soil after grazing. Then the pasture receives a long rest, which allows the soil and grass to recover.

New ranchers are spread throughout the length of California, from grassy foothill regions of the Sierra Nevada along the state’s eastern edge to the Pacific coast ranges. Many established California ranching families have large land holdings in multiple locations, but new ranchers tend to have smaller and fewer parcels of land.

Diversification is a key economic and ecological strategy. The average new rancher raises two types of livestock, and one-third of them also produce crops. The majority of these new ranchers (53%) are managing sheep, while less than half (47%) are raising beef cattle.

Many of these new ranchers view improving the environment with grazing animals as a way to positively affect the world. Like millennials in general, they want their work to be purpose-driven and are seeking work-life balance.

Although many are struggling to survive economically, these emerging ranchers believe they are providing a public service to communities. Some of them suggested to us that California should reconceptualize ranchers as ecosystem stewards who use grazing animals to restore watersheds and habitats, creating more resilient communities.

These services are valuable in California, where active management of landscapes can foster and enhance the state’s incredible biodiversity. It also reduces grasses and other forages that are potential fuel for devastating fires.

So far, however, new forms of ranching have received little public buy-in or assistance. While this type of ranching has been gaining popularity, many policymakers and agricultural agencies still tend to equate livestock production with California’s US$3.19 billion beef cattle industry.

We see a critical opportunity for the public and government agencies to actively support ranchers who are working to mitigate the climate crisis. Several new and expanding funding streams could provide public support to new producers, including California’s Healthy Soils Program and the U.S. Department of Agriculture’s Beginning Farmer and Rancher Development Program.

Consider the staggering impact of wildfires, which generated $13 billion in insurance claims in California in 2018. Expanding incentive programs for new and beginning ranchers who are interested in fire mitigation and climate adaptation could support California’s land management goals.

However, without an increase in outreach and support, the future of these new ranchers is uncertain. Help from university researchers and agricultural and natural resource extension advisers is crucial to increase the number of new ranchers who begin and stay in ranching. And partnerships among universities, government agencies and nonprofits can help the next generation pursue innovative solutions to offset carbon emissions and reduce wildfire risks.